Last year my Spalt hops were the only hops which produced cones.  They produced quite a bit, so it seemed, and I had somewhere between 1 and 2 pounds of cones.  The leaves were thick on the Spalt and came just short of reaching the roof in September.  The Mount Hood, Kent Golding, and Willamette never got taller than me.

This year my Mount Hood are now at the same point they were at the end of last year.  The Kent Goldings and Willamette are both over 10 feet, and I will need to find a way to extend their climbing rope to 20 or more feet.  The Spalt are scaring me.

The Spalt have already reached the roof.  They are spidering all over the deck.  I’ve added new twine in an attempt to build a canopy.  They are already half way across from the garage to the house. 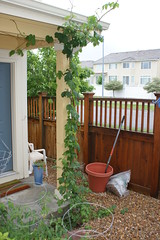 In all cases, my hops are already doing better than they were at the end of September.

Here are pictures from last year, and some from this year.  You can see how they started as small twigs, to the jungle they have grown to.  I’ll continue to post hops photos on Flickr if you want to follow their progress.  If the hops do not choke me in my sleep, I will have tons of hops this fall!