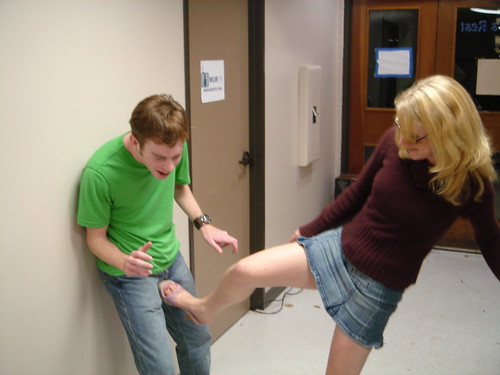 A re-enactment? Do not try this at home. (courtesy of kevinclark on flickr.com)

Megan Jane Conroy, a 17 year old Australian school girl returned to her home in Sandstone Point north of Brisbane to find her mom and several of her friends celebrating a birthday party.  She asked one guest if he was a “kiwi”, a word used to describe people from New Zealand.  When the 40 year old man answered yes, she told him to “get f***ed”.  Apparently she doesn’t like “kiwis”.

She then was offended by the “kiwi” when he pronounced her name incorrectly.  He said “Meagan” instead of “Megan”.  She punished him with a knee to the groin and demanded that he say it correctly.  It isn’t clear if the man attempted to correctly pronounce her name or simply whimpered while gasping for air, but she pushed him up against a wall and kneed him again.  The drunk school girl was pulled from the man while she tried to kick him for a third time.

The man was treated for severe bruising and tenderness to his testicles, pride.  The court was told that the girl was drunk at the time, and the behavior was out of character.

She pleaded guilty and was released on a $200, six-month good behavior bond.  No conviction was recorded.