Party animals – Do animals get drunk?

Stories of drunk wild elephants have a long history in Africa. Supposedly elephants get sloshed by eating the fermented fruits of the marula tree. Hilarious footage of an elephant purportedly doing just that is included in the 1974 animal documentary “Animals are Beautiful People” but in 2006, researchers showed plowed pachyderms are just a myth. In the paper “Myth, marula, and elephant: an assessment of voluntary ethanol intoxication of the African elephant” published in Physiological and Biochemical Zoology, researchers calculated an adult African elephant would have to consume an unrealistic number of overripe marula fruits to get the job done and concluded “there is no clear evidence of inebriation in the field”. What explains the persistence of drunk elephant stories then? The lead author, when discussing the paper with National Geographic, explained: “People just want to believe in drunken elephants”—undoubtedly one of the funniest quotes ever in scientific journalism. 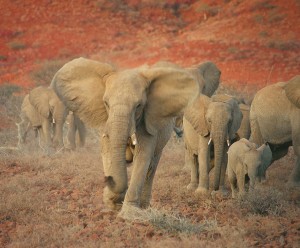 Elephants may not become intoxicated under natural conditions, but there is evidence elephants can develop a taste for human alcoholic beverages and turn into mean-ass drunks. There are many reported incidents of elephants in India seeking out and drinking human made rice beer. They subsequently tear shit up or even join the not so exalted ranks of drunken Darwin award winners by getting themselves killed. In 2004, a group of elephants reportedly drank rice beer in a remote Indian village, started getting rowdy, and knocked down an electrical pole on themselves, killing 4 of them (God who had to clean that up?).

The only thing more dangerous than driving while drunk is flying when drunk. There are many, many reports of birds —cedar waxwings in particular—getting smashed figuratively and literally on berries that have fermented. Getting drunk for birds often ends the same way it can for humans, that is to say, badly. The most common reports are of drunk birds flying right into buildings/windows or passing out, falling from trees and dying from the impact. I could find little evidence that birds ever get drunk for fun; it happens by accident when berries ferment under certain conditions and the birds are unable to distinguish a fermented berry from a normal one. Symptoms of drunkenness in birds can mimic symptoms of sickness from illness such as the bird flu, which as you can imagine, really freaks people out.

There is very little evidence that the vast majority of animals seek out and consume ethanol when it occurs naturally. This makes sense as animals do not have the infrastructure to protect them from their own bad decisions—such as police officers, ambulances, hospitals, and stomach pumps. If Jonny roadrunner eats fermented cactus fruit, gets smashed and passes out in the middle of Southern Ave in Tempe, Arizona, there won’t be any cadre of his fellow birds picking him up, he’ll be killed. Contrast that to the college student that once shared an emergency room with me with a near fatal blood alcohol content of 0.4 found under the same circumstances—he lived—thanks to the diligent work of his fellow humans. Animals don’t have that luxury. There are studies in fact, that show when fruit bats get accidentally intoxicated, they seek out a type of sugar that helps them sober up faster. We know that’s not the case with frat boys.

Despite this, there are a few animals that have been found to naturally consume ethanol, in particular a Malaysian treeshrew that likes to drink the fermented nectar of the bertam palm tree. However, the tippling treeshrew does not show any observable signs of drunkenness (where’s the fun in that?). Researchers theorize that the ethanol still has some type of pleasurable neurological effect the shrew gets in exchange for acting as a pollinator for the tree. 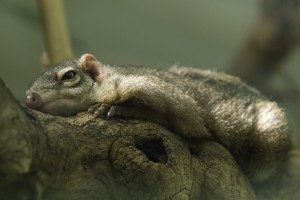 Some tree shrews are immune to getting drunk. Bummer. (image from iPhotograph on flickr.com)

So what about our closest relatives, other primates? Turns out they are part of the temperance movement. Katharine Milton, a researcher looking into the evolutionary history of human fondness for ethanol, conducted a survey of primatologists covering 22 different primate species. Specifically she asked at what stage of ripeness monkeys preferred to eat fruit. Not one out of 22 species preferred overripe fruit (fruit with the most ethanol), and it appeared all species in fact, studiously avoided the ethanol containing fruit. Asked if any primatologists had ever observed what appeared to be intoxicated behaviors, only two incidents out of combined thousands of hours of observations were reported, leading the researcher to hypothesize that drunkenness in primates happens very infrequently. This makes sense as a drunk monkey is more likely to end up a dead monkey.

So what does sobriety in our closest relatives have to say about the human predilection for drinking ethanol till we puke? Alcoholic consumption is most likely cultural instead of biological. “As cultural animals, humans have little innate nutritional wisdom,” says Milton, “and for this reason may have unusual difficulty in determining when it is prudent to quit ingesting ethanol”. No shit, right? See prime example above of drunken- passed-out-on-Southern Avenue Arizona frat boy. Our fondness for the stuff, according to Milton, is also apparently fueled by existential angst. “Humans also appear to be the only animals with a highly developed sense of self-awareness and thus they may be the only animals that might wish to escape from their own consciousness”. Having on more than one occasion used alcohol for this exact reason, couldn’t have said it better myself.